Probability, Percentiles, and Binning - How to understand and interpret EPSS Scores

By Sasha Romanosky and Jay Jacobs

One of the issues users must consider when implementing EPSS is interpreting the results. Currently, EPSS provides both a probability of observing exploitation activity in the next 30 days, and a percentile (a rank ordering of probabilities from highest to lowest). In addition (or alternatively) some users may want to apply ordinal labels (high, med, low) to EPSS scores, or other transformations. In this article, we discuss the advantages and disadvantages of multiple approaches.

The native and most direct output of the EPSS model is a probability which is expressed as a value between 0 and 1. The figure below shows the probability distribution of EPSS scores for over 170,000 vulnerabilities as of March, 2022.

On one hand, using the native EPSS probabilities provides the purest form of the EPSS score, and because the result is a measure of probability, it can be used properly in mathematical operations. For example, EPSS probabilities can be scaled, in order to estimate the threat to any IT system containing many vulnerabilities, such as a laptop, a network, or a corporate office. One need only invoke standard statistical properties in order to compute the probability of at least one vulnerability being exploited (e.g. see https://www.statology.org/probability-of-at-least-one-success/).

On the other hand, interpreting meaning from probabilities is notoriously difficult for people, especially when most values are compressed into a relatively small range (e.g. see https://www.youtube.com/watch?v=JhfMkmzaNdU). For example, how are users supposed to interpret the overall importance of a vulnerability with a probability of 0.212? Or alternatively, how should we think about comparing the relative difference in threat between a probability of 0.115 and 0.087? Yes, one is larger than the other, but how much larger? How much of a difference in threat does the former pose, relative to the latter?

And so, while probabilities are the native output of the EPSS model, they can sometimes be difficult to internalize. And so next, we consider the use of percentiles. 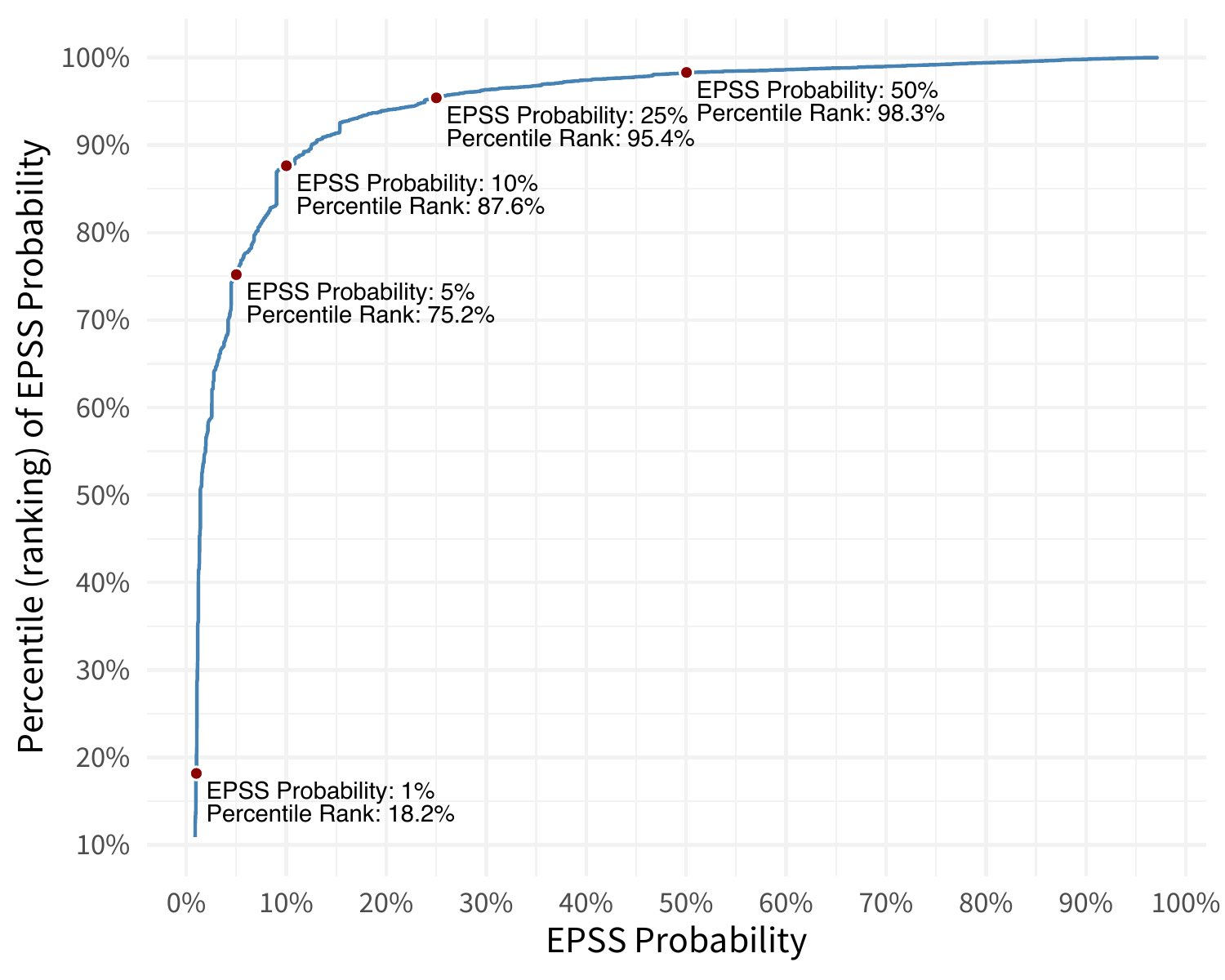 On the other hand, percentiles communicate rank ordering, and therefore convey a localized context. That is, they better communicate the relative importance. Knowing a vulnerability is ranked in the 88th percentile (or top 12%), may be perceived very differently than seeing just the absolute probability of 10%. And so while a probability alone (10%) may be difficult to interpret for some, adding in percentiles (88th) may provide the relative context needed for well-informed prioritization decisions. This highlights a very important difference between probability and percentile for EPSS scores.

EPSS probabilities convey a global, or overall, sense of the threat of exploitation, while percentiles provide a relative, or localized, measure of threat.

A third alternative to presenting EPSS probabilities is with categorical (ordinal) labels, such as "fix now / fix later," or "low, medium, high, critical." Bins provide a simple heuristic for users, and bypasses the cognitive effort required to process numerical distributions of values. Heuristics are important and useful mental shortcuts that we employ every day when making decisions, and can also be useful here.

However, there are a number of problems with binning. Bins are, by construction, subjective transformations of, in this case, a cardinal probability scale. And because the bins are subjectively defined, there is room for disagreement and misalignment across different users. There is no universal "right" answer to what the cut off should be between a high, and medium, or medium and low.

Moreover, arbitrary cutoffs force two scores, which may be separated by the tiniest of a value, to be labeled and then handled differently, despite there being no practical difference between them. For example, if two bins are set and the cutoff is set at 0.5, two vulnerabilities with probabilities of 0.499 and 0.501 would be treated just the same as two vulnerabilities with probabilities of 0.001 and 0.999. This kind of range compression is unavoidable and so any benefits from this kind of mental shortcut must be weighed against the information loss inevitable with binning.

For these reasons, EPSS does not currently bin EPSS scores using labels. However, the EPSS SIG always welcomes constructive feedback and suggestions for how to better present this information. Send comments to epss-sig@first.org.

Below we summarize the advantages and disadvantages of these three approaches. 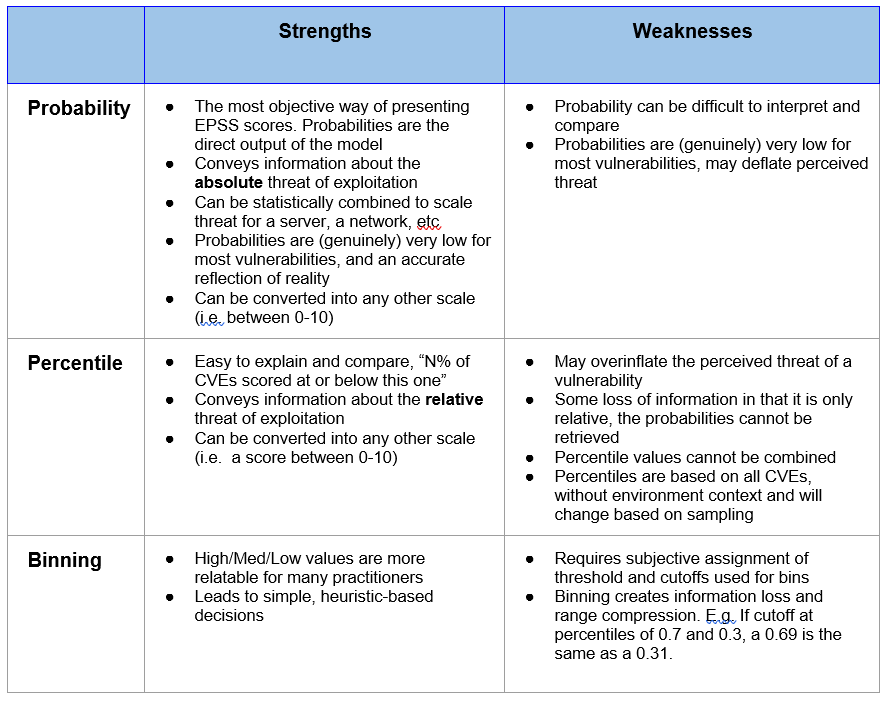 It is the official guidance and recommendation of EPSS that:

References regarding probability of exploitation:

● "Data science lets you focus on the 3% of vulnerabilities likely to be exploited," Tenable, Predictive Prioritization

● "According to our data sources, less than 2% of CVEs have been actively exploited in the wild," Kenna/Cyentia, Prioritization to Prediction volume 1.

● "Around 3.4% of CVEs published in 2017 have so far been incorporated into malware and exploit kits, " NopSec 2018 State of Vulnerability Risk Management