FIRST Technical Colloquia & Symposia provide a discussion forum for FIRST members and invited guests to share information about vulnerabilities, incidents, tools and all other issues that affect the operation of incident response and security teams.

For you that are new in FIRST or never have attended a TC, the colloquium typically provides one whole day of plenary sessions for informal discussions and presentations on topics of FIRST membership interest, or that are more sensitive in nature and related to the day-to-day work of participants.

The FIRST colloquia are typically hosted by members and since 2005 are being organized in a regional basis — the current regions being Latin-America, North-America, Europe and Asia-Pacific. For each region the goal is to organize one TC per year — either standing on its own, or jointly with regional CSIRT initiatives.

Honeywell is hosting a TC focused on PSIRTs in Atlanta, GA, USA on February 27 – 28, 2018 (two days). The TC is open to members and non-members alike, oriented for those are part of PSIRT or are considering forming a PSIRT.

See the open Call for Speakers for this event. 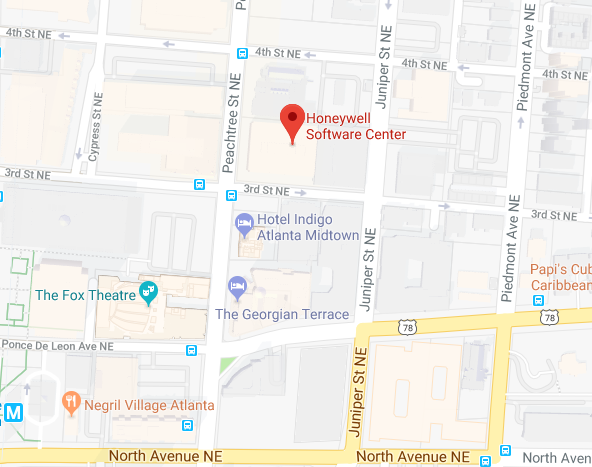 Maps provided by Google, click on the map to load it on Google Maps

All sessions of the PSIRT TC 2018 will be held at: